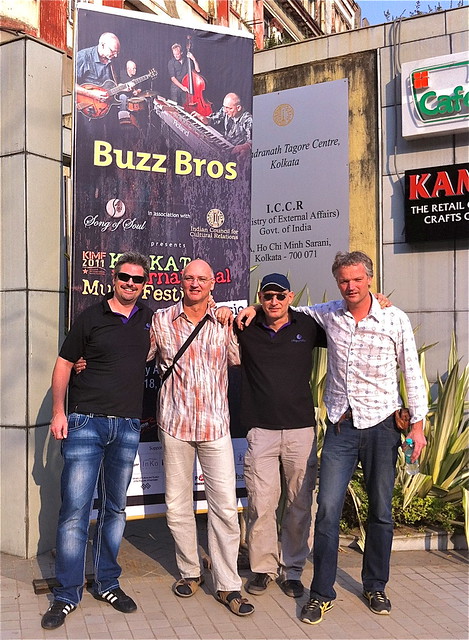 Tuesday, November 8, 2011
Around 9:00 AM the BBBand gathers at Schiphol Airport for a ten-day tour to India – our first time! Our regular drummer Chris Strik can’t make it; he’s replaced by Marc Schenk, who joins the Buzz Brothers Marnix (guitar) and Berthil (keys) Busstra, and bassist Frans van Geest. Organizing this tour took a lot of time and energy, partially due to the complexity of getting visa and such. India is quite bureaucratic, and they simply love paperwork. You need to fill out forms for anything you do and any place you want to go, the resulting papers ending up on huge piles – and there’s some 1,3 billion people out there! At 11:30 PM we arrive in New Delhi, where mr. Anand Singh Bawa is waiting for us. He’s the organizer of the first part of the tour. He gets us to a guest house, where we can get some sleep. We hit the sack around 3:30 AM.

Wednesday, November 9
We’re up some three hours later, early enough to catch our flight to the city of Pune, but there’s no time for breakfast. Soundcheck for our first performance is at 4:30 PM at Landmark, a large CD store in one of the local malls, where they’ve set up a large stage for the show. You never know what kind of equipment you get to work with on tours like this, but in India they apparently know what to provide you with. Prior to the show, Berthil and Marnix are interviewed for one of the main newspapers. The lady journalist has thoroughly studied our website, and she comes up with questions that really make us think. Fun! We have a great show, and the musical interaction with Marc is amazing. It is as if we’ve been playing for years. The audience loves the music, and their response is both warm and polite. Typically Indian, we find our later on: All other audiences tend to respond the same.

Thursday, November 10
We spend the day in Pune, where we give a workshop in a local music store, aimed at musicians with an interest in jazz. Though this particular style of music isn’t very popular in Bollywood-minded India, there still are plenty of young people who have somehow been touched by its language, and want to learn more about it. In Pune too, apparently. A 16-year old girl plays the drums in a blues, and a 20-year old guy joins us on guitar in Autumn Leaves. Interacting with young musicians this way is truly inspiring.

Friday, November 11
We get up at 6:00 AM for our trip to Mumbai. it is a long ride, and we have plenty of time to take a closer look at the country. Traffic is crazy, and it feels as if we get to see most of the country’s inhabitants… Mumbai is huge and impressive, with both slums and richer areas. We give another workshop in the afternoon, in a music store that is so small that we end up putting the drums in front of the rest of the band. Makes for a nice change! Afterwards, Singh Bawa takes us to a great restaurant where we enjoy the very best meal of this trip. Indian food is really amazing all over, but how this chef uses his spices is sheer magic! Singh Bawa tells us of a musician who even doesn’t ask for money when he’s in India: He just wants to have his daily dinner in a restaurant like this. We now know why. Todays performance takes place in another Landmark store. Traffic is kind of unpredictable in Mumbai, so things do not go as planned. Our equipment is two hours late, for example. We explore the store, trying to kill some time, and we’re happy to run into some kind of basketball game that allows us to reset the band hierarchy. The long wait doesn’t keep us from an inspired performance, and the audience loves the music. Kannada, an arrangement of an Indian lullaby, is our number one hit of the night. There are people who don’t recognize this specific song (again, India is huge), but everyone appreciates the fact that we actually integrate Indian melodies in our music. We don’t stay up late after the show, as the next day…

Saturday, November 12
… we have to catch an early flight to Chennai. A busy schedule, this first week, and we are getting really tired, so we’re extremely happy to find out that we’re staying in a splendid, very comfortable hotel, one of the many Taj hotels and palaces. Marnix and Frans hit the sack, while Berthil and Marc visit a radio studio for an extended interview. The DJ is not allowed to deviate from her playlist, so she can’t play any of our music. As an alternative, she suggests that Berthil and Marc sing a number of typical BBB compositions. She also wants to hear an example of real Dutch music, resulting in one of the worst performances of the Dutch hit song, Een Beetje Verliefd, ever. Everybody’s happy that none of this was recorded… Later on, we play a gig at the hotel. The beautiful lounge has been decorated with tables and chairs, making for an ambience that doesn’t truly match our music – but we find a way to make the music match the audience, and they almost break down the house. Indian style, that is. We’re really happy to notice, again, that our non-commercial music seems to have the same effect all around the world, touching all kinds of different people. It is a truly universal language, and we’re proud to have our share.

Sunday, November 13
Finally, a bit of spare time. We decide to go to another Taj hotel, close to the beach, and we spend most of our time around the swimming pool. Our performance takes place in the main hall of another mall. Again, a beautiful place to play, with people leaning over the huge balustrades that surround the stage. We play a really energetic set, the audience erupting in applause. After the show people line up to buy CDs, ask for autographs or just say hi. Their friendliness and enthusiasm is truly heartwarming, and the positive energy that we invested in our show seems to come back to us twofold.

Monday, November 14
We’re flying back to Delhi, finishing off the first part of the tour. We thank mr. Singh Bawa for his fine organizational talents and taking so good care of us. He’d love to see us again for another tour, and we couldn’t agree more. We decide for dinner in a Chinese restaurant, and find out that Chinese food in India has been adapted to the Indian taste just like Dutch Chinese food is made for Dutchmen.

Tuesday, November 15
Our first entire day off, so we do what tourists are supposed to do: go see the Taj Mahal. Quite an enterprise: it’s a five hour trip, and it feels like visiting the Eiffel Tower because you happen to be in Amsterdam (and we know that some people think that’s quite normal…). Berthil prefers to spend part of the day in bed instead. Our taxi driver is a driving comedy show, and we’re having a lot of fun. He can’t sing but loves to, he scolds at everyone who wants to have his share of the road, and though his English isn’t too good, it’s good enough to exchange plenty of bad jokes. The Taj Mahal is impressive, and we’re happy to be here early. The place is not crowded yet. For many people, it’s a place you simply must have been to, and there are many large families taking as many photos, all showing this stunning piece of architecture in the background.

Wednesday, November 16
We fly to Calcutta today, for the second and final part of the tour. Travelling in India is quite exhausting, also because of the time consuming airport safety procedures. Calcutta is completely different from the part of India we just came from – and of course: Compared to European countries, India feels more like a continent. Other than the cities we’ve seen so far, the streets are crowded with old-fashioned rickshaws, adding to the colorful image.

Thursday, November 17
Frans is sick and stays in his room all day. He simply hasn’t got the energy to do anything else. The rest of the band is invited for lunch by Kaushik Dutta, our very friendly organizer, who takes to a Bengalese restaurant in one of the posher areas of the city. The food is delicious, again, and we get to appreciate the subtle differences between the Indian and Bengalese cuisines.

Friday, November 18
Today is the first day of the Kolkota International Jazz Festival; we’re playing a beautiful large venue in the middle of the town, where we are the main act of the night. Our supporting act is an Indian band with a fine, professional percussionist (seated on a riser, center stage!) surrounded by some local amateurs. It’s inspiring to see how the man employs large gestures and facial expressions trying to get the best out of his fellow musicians. Our set is really energetic, and the audience loves the music – again. A great concert to finish the tour! Afterwards, we have drinks with the Dutch consul, in the building of the British Embassy. Everybody is really kind, especially the consul himself, mr. Shah, who urges Marnix to send him a recording of our ‘Indian’ song, ‘Kannada’, which visibly moved him. Back in our hotel, we have a final drink to celebrate this both intense and successful first Indian tour.

Saturday, November 19
Flying back to Amsterdam via Delhi. India? It was great!