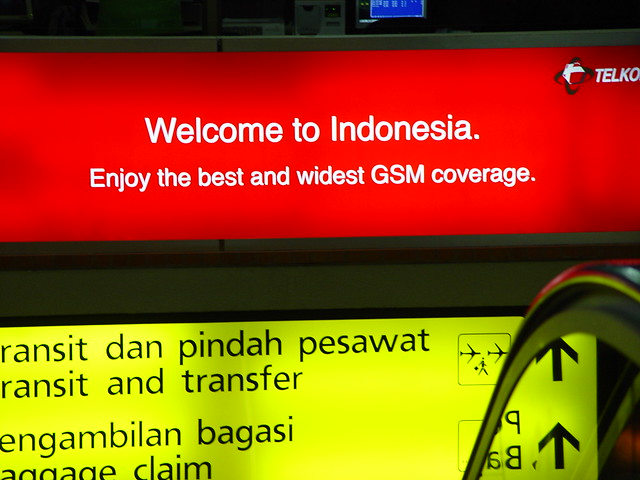 On the evening of Tuesday, November the 21st of 2006, the Buzz Bros Band leaves Holland for a series of concerts in Indonesia. It takes sixteen long hours to arrive at Jakarta Airport, after a brief stopover in Kuala Lumpur.

The first two concerts of this exciting tour take place at the Jakarta JakJazz Festival, a large, three-day festival that could best be compared to the Dutch North Sea Festival. Our hotel, the Sultan/Hilton, is very close to the festival grounds.

JakJazz is a large and prestigious festival. Everything is taken care of really well and the organization is faultless. Much to our – very pleasant – surprise, all musicians are invited to an amazing gala dinner, the day before the festival. And amazing it truly is: after a police escorted trip through Jakarta (including flashing lights and blocked-off roads!) we get to walk towards a number of giant dinner tables between rows of saluting soldiers, in a exciting scenery with spouting fountains, a laser show, and a traditional Javanese dance performance. Imagine this taking place on a huge square with a impressive monument – as if you’re having dinner at Times Square!

We also find that the governor of Jakarta, capital of Indonesia, is involved with JakJazz, and it’s great to see someone in that position who’s truly interested in jazz.

The first concert takes place on November 24, a Friday. The outdoor stage is beautiful. We’re happy to see that it has a large roof: the conditions are literally tropical. Everybody loses what seems like liters of perspiration, and it’s only sound check time…

There’s a press conference before the show. The room is filled to the brim with journalists who want to know exactly what we’re going to play, carefully jotting down the title of each and every song. The show, later that day, is a huge success: the Indonesians really love our groovy approach of jazz music. Everyone knows that music is a universal language – but still, we are moved by the fact that several muslim women approach us after the show, telling us how touched they were by our music. So much for prejudice on cultures and music…

Our second show, the next day, takes place on the Busway Stage, aptly named after the fact that it is a converted bus with a fold-out stage. The bus is built and owned by the Dutch pianist René van Helsdingen, who currently uses it to travel across Indonesia.

The stage sound is not what we had hoped for: we can’t hear each other really well. That makes this show a bit hard, especially after the extremely inspired performance the day before. The PA sound is okay though, and the audience loves the music – again! What they really appreciate is our version of Burung kaka tua: Everybody here knows this Indonesian lullaby that we arranged especially for this trip. They sing along as we play it, and you see people thinking back of days long gone…

The next day, Sunday November 26, we have a national flight from Jakarta to Salatiga, a student city, for a performance at the University campus. Our hotel is an amazingly exclusive place with a Spa, massage facilities and numerous other features that are actually a little confusing to a bunch of straight-forward jazz musicians…

For our performance, Monday, the number of tickets sold overly exceeds the number of available seats, so the show is moved to the University’s largest venue. Again, the organization is top notch, and there has been a lot of advance publicity, including a number of huge banners alongside the road.

At sound check, that afternoon, a gamelan orchestra is rehearsing in the room next to us. We immediately suggest that they join us for a song that night. There is no time to rehearse, but luckily they ‘re not afraid to take a shot at it – we’ll just see what happens!

The show is one of the highlights of the trip, the audience brings the house down. We’re glad the we invited the gamelan orchestra: they play the same tune they were working on that afternoon, and we join them after a while. After the show, no one wants to miss the opportunity of being photographed with the members of the band. (Of course, everyone’s carrying a cell phone with a camera.). Also, we’re glad that we took so many boxes with our DVDs and CDs: we sell them all.

On Tuesday, November 28, we have a two hour trip to Solo, where we play that same night. The venue is a wonderful, old, colonial building with a square stage, surrounded by the audience, who are seated on mats. A very special setting indeed.

At sound check, a guitar amp appears to be out of order. We have to wait for another one, which seems bad at first (it is extremely too hot to hang out, or do anything else – and there’s no air-conditioning), but it does turn out great: we get to meet a singer who specializes in overtone singing, creating fascinating, intense sounds over an incredibly wide tonal range. So another invitation follows, and again we experience a very musical and interactive cooperation that makes this a special night – for the audience, but also for the singer and the band.

The show is sold out, but there’s a definite feeling of intimacy that night. We adapt the repertoire to this setting, playing some extra quiet songs. A great way to finish the tour. The next day, we’re flying back. A national flight to Jakarta, and from Jakarta via Kuala Lumpur to Schiphol Airport, Amsterdam. Holland. It’s cold and wet again. We’re home.