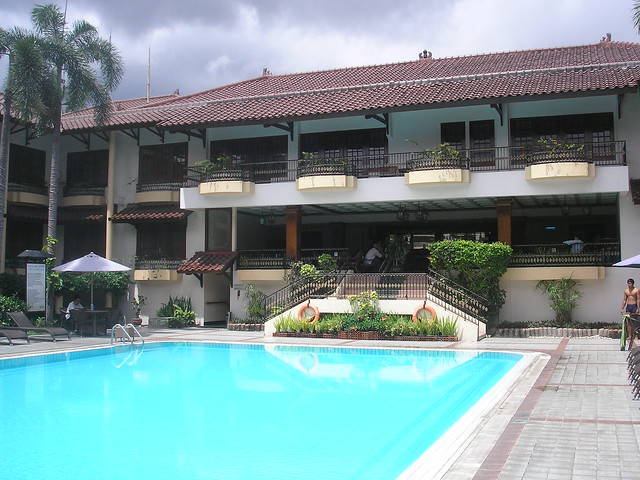 Saturday, December 10
The plane that takes us on our second trip to Indonesia leaves Schiphol at 09:00 PM: the Buzz Brothers, Marnix (guitar) and Berthil (keys) Busstra, drummer Chris Strik, and bassist Thomas Pol, a 22-year old (!) super talent who replaces our regular bass player Frans van der Geest for this series of concerts. We had picked Malaysian Airlines for this tour, based on our prior experiences, but we find out we’re flying KLM the first part of the trip, from Amsterdam to Kuala Lumpur, so we can speak Dutch for another couple of hours.

Sunday, December 11
We arrive in Kuala Lumpur in the afternoon, and change over to Malaysian Airlines for the second and final part of the trip, to Jakarta, where we’re taken to a hotel near the airport for a night of sleep. The first thing we see at the hotel is a huge Christmas tree, Jingle Bells sounding from the hotel speakers. A warn welcome in a warm country! We find a pool table in the hotel, located in a large, resonating room, background music sounding from far away. A weird ambience, kind of… We play a bit, and then move to Berthil’s room. Being the most fanatic smoker in the band, he always has a smoking room. The place to be, for all of us.

Monday, December 12
We get up at 6:00 AM for an early flight to Yogyakarta, where we’re picked up by Anggi, a very kind lady who will be our host for the first section of the tour. She takes us to a beautiful, colonial style house where we get some rest. In the evening, we play the Auditorium of the Medical Faculty of the Yogyakarta University. It’s a great venue, and the equipment is perfect. Indonesia is developing quickly, we feel, and that’s definitely reflected in the gear we get to play on. Makes playing a lot more fun, too! There are plenty of empty seats, due to the rain: Indonesians don’t like to get wet outside, we’re told. Bassist Thomas is doing a fine job, and he and Chris turn out to be a great match. After the show we all get presents (a nice Indonesian habit), followed by the common ritual: an autograph session, and being photographed with most of the members of the audience… The two Buzz Brothers are interviewed by a guy from the local newspaper, who hardly speaks English. A challenging conversation, you might say, and we’d love to be able to read the resulting article.

Tuesday, December 13
A day off in Yogyakarta, a great city to spend some time. Berthil and Thomas visit the Borobodur, the world’s largest Buddhist temple. The trip to the Borobodur is an adventure in itself. Due to the heavy rain, the road is invisible from time to time. They do get there in one piece, though, and truly enjoy the impressive building. As tourists are supposed to, they ascend the spiral pathway around the temple, symbolizing the trip the human soul takes on its way to enlightenment. Anngi takes Marnix on a tour to the old part of Yogyakarta, where we meet some older folks who – as soon as they find out we’re from Holland – start speaking Dutch immediately. Despite the colonial past they are nothing but positive about their experiences with our fellow countrymen back then. The band has dinner with Angi in the Three Women Restaurant, a place ran by women only. We simply love the food, and we’re happy that the colonial past never influenced the traditional Indonesian cuisine – though we think these cooks could even turn a traditional Dutch dish into an extremely tasty meal…

Wednesday, December 14
We’re flying to Surabaya in a small, old-school propeller aircraft that makes a hell of a lot of noise. Eat your heart out, Indiana Jones: here’s the Buzz Bros… Lystia, our local host, is waiting for us at the airport. In the car, she tells us all about this great brand new hotel that she’s taking us to: It’s the only 100% non-smoking hotel in Indonesia, she cheers. We’re not half as happy: we all smoke! We love to have our dinner someplace else, which calls for a half hour taxi ride to the G-walk, a special street with Disney-style buildings on both sides, housing restaurants and bars only. It’s fun, though, and we have a pleasant meal along with numerous local visitors. What more can you ask for.

Thursday, December 15
In the morning, Lystia takes us to a cigarette museum where they make the typical Indonesian kretek cigarettes – all by hand! Hundreds of women are at it, working in a tempo that makes you feel as if you’re watching a movie at triple speed. Bizarre! At soundcheck, a couple of hours later, we’re happy to see that everything has been perfectly arranged, again. Some ten journalists show up for our press conference. Two of them speak English, and they double as interpreters. They’re all constantly laughing. Is that us, or are they that happy all of the time? A brief but heavy tropical cloudburst makes for a delayed start of the concert, and the audience gets in late too, the last people getting in towards the end of the show. Afterwards, zillions of photos are taken with the band, and good-looking Thomas turns out to be an extremely popular model among the many women – beautiful women, all over the place – that want to join us on camera. A true privilege…

Friday, December 16
We’re flying to Jakarta, the capital, today. The city is known for its traffic chaos, and the scheduled half hour drive from the airport to the hotel takes us five times as long. The hotel is huge. Our rooms are on the 29th floor, and we enjoy an insane view over a city that houses some 9 million people. With our recent trip to India in mind, we pick an Indian restaurant in the hotel. After dinner, we decide to go out, ending up in what looks most like an Irish pub, the type of pub you can find all around the world. A couple of drunk guys are playing pool. We join them, resulting in a glorious victory for the band – and two glasses of free Guinness.

Saturday, December 17
The final performance of this tour takes place outside, on a square that’s part of The Erasmus House, the Dutch Cultural Centre. They’ve built us a huge stage, and the engineers are as professional as the equipment: You can clearly tell they’ve done this before. The only thing that could spoil the show is another shower. Fortunately, the weather gods are with us today! By the time we’re going to play, people are crowding the place, and there are lots of families with children, making for a nice ambience from the start. The audience inspires us to include our arrangement of the Indonesian children’s song ‘Burung Kakatua’. A good idea, and everybody wants to know if we have a CD featuring that track. We don’t – but we definitely should! After the show, Thomas goes out with a friend who came to see the show, while the rest of the band decides to call it a day. Chris goes to bed early, as he want to catch an earlier flight back home: He needs to be back in time to sign papers for the new house he just bought.

Sunday, December 18
We fly back to Holland with a stopover in Kuala Lumpur. The night flight from there to Amsterdam is great: There are many empty chairs so we can all lie down and have a decent night of sleep. A perfect match for a perfect tour, that mostly felt like a relaxed holiday with some in-between