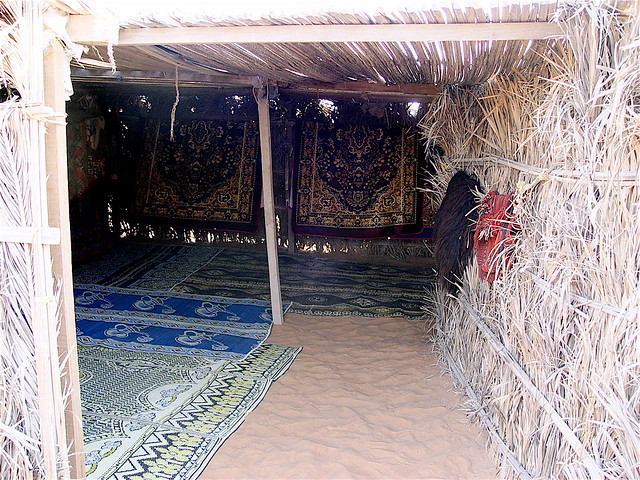 It’s March 14, 2008 as the Buzz Bros Band leaves Schiphol Airport, Amsterdam, for a brief but exciting international tour to the Gulf state of Oman. An eight hour flight takes us there. At 104°F, the temperature takes a little getting used to: it’s quite a change from Holland’s spring weather.

The band has been invited to Oman by the Dutch consulate. Their representative, Sander Jansen, turns out to be a great host. We’re picked up at the airport of Muscat, and spend the first night in the splendid Muscat Intercontinental Hotel.

The first day of our visit takes us to Sohar, a large port some 125 miles north of Muscat or Masqat, as it’s also known. It’s a long drive. Like many other cities in the Gulf area, Sohar is going trough a period of rapid economic growth. Quite typically, there’s a lot of hard work and little entertainment. A jazz concert is quite a rarity.

On our way to Sohar we stop by at the National Conservatory to pick up a double bass for René. Much to our amazement, the place turns out to be heavily guarded, and nobody tells us why.

In Sohar, we stay at the old and beautiful hotel where we’ll have our first Oman performance. Relative humidity is really high out here, and all our instruments feel as if they’re soaked. It even renders the double bass unplayable.

René doesn’t feel well either, and for a while we’re not sure if he can play at all — but he fires himself up and comes along. The band sounds great that night, and the venue is filled with an interesting mixture of international guests, all working in Sohar. The next day, drummer Chris, guitarist Marnix, and manager Natasha leave for a trip to Sawadee Desert.

René’s still sick and pianist Berthil decides to stay with him. The desert trip is like a Camel Trophy experience in a nutshell, with spectacular up and downhill runs on steep desert dunes. We spend the night in a traditional Bedouin camp. No electricity, and extreme silence, especially after dark. Our host, Rashid, makes us feel part of the family, rather than visiting tourists. Later that evening, a couple of musicians start playing around the open fire. Chris soon joins them, and Marnix would have loved to have his bouzouki with him — but it’s back at the hotel.

We return to Muscat the next morning, for a performance in the picturesque garden of the Intercontinental Hotel where we spent the first night of this trip. It’s a somewhat more prestigious show with a number of VIP guests. René’s still not feeling well, but again powers himself up to join the band for a great performance. The audience, probably not used to listening to our style of music, loves the band, proving again that good music is much like a universal language. Oman’s largest newspaper is around for a comprehensive interview and a photo shoot with the band, resulting in a full page article the next day. (see below)

As we fly back to Schiphol Airport again, we have added yet another great experience to our lives…